A cellar tour to remember

Taittinger is honoured to play a key part in moments of pleasure and celebration across the world. Demonstrating the art of champagne production from its roots in Reims is a source of great pride for those involved in its production. Taittinger opens its doors throughout the year to its cellars, showing visitors the secrets and history behind the soul and style of the Champagne House. Naturally, a tailor-made tasting session is included as part of every tour.

Throughout the year, Taittinger welcomes visitors from across the world. On offer are guided tours, presenting the art and the production that goes into making a bottle of champagne. We go back in time, through the ruins of the Saint-Nicaise Abbey (dating back to the 13th century). Visitors go down 18 metres below ground level into the breath-taking Gallo-Roman chalk quarries, which are part of the ‘Coteaux, Maisons et Caves de Champagne’ (hillsides, Champagne houses and cellars in Champagne) included on UNESCO's list of Cultural Heritage.

Throughout the 4th century, the chalk quarries were painstakingly carved out to extract chalk blocks for building work, before, 900 years later, becoming the cellars for the Saint-Nicaise Abbey. They became a network of galleries; linking cellars, crypts and vaults for storing wine first made by the Benedictine monks in Champagne. The Abbey was destroyed during the French Revolution, but the cellars remain intact. They now belong to the Taittinger Champagne House and are notably used for maturing bottles of the Comtes de Champagne, which can be seen all throughout the cellar tour. Over the course of a year, the site welcomes over 70,000 visitors, who come to admire the remains of one of the best examples of the Gothic style in the Champagne region.

Tasting the heart of the House

Following a tour of the depths of the cellars at the Saint-Nicaise site, ALL visitors can enjoy tasting samples of the Taittinger style and savour the very essence of the Taittinger Champagne House with a tailor-made tasting session.

With a thorough explanation on the history and production of each cuvée given by our experts on hand in the tasting room, one can enjoy the delicious crispiness of the red fruits in Prestige Rosé, the local flavours in the Folies de la Marquetterie, the full-bodiedness of Nocturne and the ultra sophistication of the Comtes de Champagne Blanc de Blancs, matured for over 10 years in the depths of Saint-Nicaise. ‘Instant signé’, ‘instant absolu’ and ‘instant de grâce’ are the exclusive tasting packages available to be enjoyed... 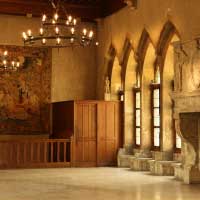