In tribute to Autumn

Claude Taittinger wanted to pay tribute to the ‘Château de la Marquetterie’, where the story of the Champagne House started. He came up with a wine that was created from the Chardonnay and Pinot Noir vines growing on the hillsides around the house. It was to be a champagne that evoked a feeling of homeliness; a subtle blend of autumnal colours, like those found in the different woods used in ‘marquetterie’ (marquetry work)...

THE 'FOLIE' OF
REASON

Just as ‘marquetterie’ (marquetry work) is a combination of different types of woods and colours, the word ‘folies’ has two meanings, the combination of which perfectly encapsulates the twin essential qualities the Château and its vineyards.

In French, a ‘folie’ can mean a very steep patch of land. It can also mean “madness” when used in another context, and indeed it could be considered “madness” to try and plant a vineyard on such a steep patch of land. The vines at ‘La Marquetterie’ cling to the hillside and were worked by the Benedictine monks for many years, and most notably by Dom Oudart, who is one of the founding fathers of champagne.

In yet another definition, a ‘folie’ can also be an 18th century term for a summer residence in the country which was understated yet elegant and with a comfortable and sophisticated interior. The aristocracy and the bourgeoisie liked to hold literary salons, and sometimes ‘fêtes galantes’ (courtship parties) here at La Marquetterie.

That same combinations of work and pleasure, reason and madness can be found in the Folies de la Marquetterie cuvee, a premier champagne from the Taittinger estate. Not only is it just made from juice from the first pressing, but it also has a subtle dominant flavour of Pinot Noir, which adds structure and richness to the wine. This is combined with Chardonnay for a touch of lightness. The blend then spends a period of time maturing in old oak barrels, which are reminiscent of the wood panelling found in the Château...
It is the perfect champagne to accompany fine cuisine. 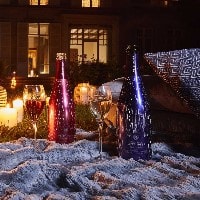