Champagne is an art

Since 1983, Taittinger has collaborated some of its greatest vintage cuvees with the work of contemporary artists. The bottle becomes both the canvas and inspiration for a special creation which eventually becomes a signed piece of artwork.
The contributor in 2016 for the 14th edition to this prestigious gallery was the famous Brazilian photographer Sebastião Salgado. He was given a bottle of Taittinger Brut Millésimé 2008 to decorate with one of his famous, globally significant pieces of art. It depicted a leopard drinking from a life-giving river in Namibia.

In 2016, as the artist for the 13th edition of this prestigious gallery, the famous Brazilian photographer Sebastião Salgado chose to adorn the Taittinger Brut Millésimé 2008 bottle with one of his major works, a universally symbolic image of a leopard quenching its thirst in the life source of Namibia.

Read + : Two artworks in one
Video

Having forged strong links with several artists, Claude Taittinger created the Taittinger Collection in 1983. He received support from some of the greatest names in contemporary art to showcase the best vintage Grands Crus produced by the Champagne House. 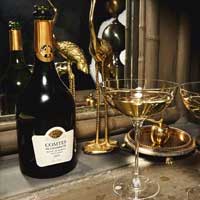 Two artworks in one

« Sebastião Salgado is like a great tree. We see the state of the planet very plainly in his work, and in himself. His photos express in a very positive manner the tragedy and crisis of men and animals living in the hope of running water in the world’s valleys (...) and the necessity of what is important in comparison with the superficial. » : this is how the Brazilian artist was presented by Pierre-Emmanuel Taittinger at the release of the 13th edition to the Taittinger Collection.

In the naming of the major works by Salgado, « La main de l’homme », « Exodes » and « Genesis », Mr Taittinger summed up the function and the symbolic, connecting them with the champagne, « to imagine the call of the earth, and to believe in and take part in creating something better, such as this bottle of wine which today has been honoured by such a strong soul ».

Born in Brazil in 1944, Sebastião Salgado studied economics and, still studying, marries Lélia, who followed the course of architecture at the National School of Fine Arts. She is the one who gives him the camera he will use a lot while travelling in Africa, while working in London for the International Coffee Organization. Photography has become such a passion that he stops his economic activity and launches, with the support of his wife, its career as a photographer. Together, from 1973, they will travel through Africa, Latin America, the Amazon. Sebastião Salgado's prolific work testifies to his commitment to the planet and those who live there, both men and animals. In « The Hand of Man », published in 1993, the artist focuses on the world of workers, paying homage to those whose lives are made of effort and toil. In « Exodes », published in 2000, it reflects the courage of men faced with dramatic or even unsustainable situations.

His final work, « Genesis », published in 2013, is a kind of « love letter to the planet », as he himself put it. The magnificently lit black and white images were taken over the course of 32 trips. Salgado chose an image for the Taittinger Collection, which was taken from this compendium. It shows a leopard in the Barab River Valley, Damaraland, Namibia. It depicts something which is universal and fundamental - an animal drinking from a river: life at its most simple and peaceful and a source of happiness.

Behind the work of art, the picture of a vintage.

Champagne Taittinger only produces a vintage when the harvest is of exceptional quality. The bottles are first aged in the cellars for several years – allowing the aromas to slowly mature and the wine to develop length and complexity – before they are ready to be enjoyed. The 2008 vintage has produced wines characterized by freshness and vivacity, with a perfectly integrated acidity that suggests they will age very well.

Intense and mineral, the nose of this Brut Millésimé 2008 combines floral and citrus notes (lemon and grapefruit). On the palate, fruit, vinosity and richness predominate.