The commitment to a name

The Taittinger family has managed the Champagne House for nearly a century. Its aim has always been the pursuit of excellence. “Having our family name on a bottle places demands and responsibilities on every minute. The name on the bottle conveys both the skills and knowledge of the past and a commitment to the future”. Pierre Emmanuel Taittinger has embodied this commitment for 40 years, and today he shares it with his son, Clovis and his daughter, Vitalie who both work beside him in the day to day running of the Champagne House. Together, they create a very close-knit and complementary family trio.

For the past 10 years in her role as Artistic and Marketing Director, Vitalie Taittinger has embodied the unique style of the Taittinger Champagne House.

Much like her father, she shares an interest in artistic creation and in the values of openness and inquisitiveness. This is combined with a desire to enjoy the present without worrying about tomorrow. To achieve this, the hard-working lover of fine cuisine, who purposefully pursues those everyday moments of joy, has a secret. “As soon as you decide to live your life each day to the full, every day will quickly become more special and meaningful”.

Read + : The magic of inspiration

When you decide to play out your life all the way, everyday, then every little thing becomes unique and poetic.

Champagne is the best way of saying "I love you" in any language.

The world of Taittinger

Clovis sails the course that Taittinger takes throughout the year, following in the footsteps of his great uncle, Claude and his father, Pierre-Emmanuel.

Since taking up the reins of Export Management in 2007, Clovis Taittinger has focused on developing international sales, driven by a genuine love for the family’s Champagne House. An exceptional ambassador, both creative and inquisitive, he constantly searches out new, prestigious partnerships around the world. It is thanks to his ambition and passion that, from 2014 onwards, Taittinger became the official champagne for the greatest sporting competition in the World; the FIFA World Cup.

Read + : Pleasure for all

There is something universal about Champagne that no other wine possesses !

Pierre-Emmanuel Taittinger is a fervent ambassador for the Champagne region and its history and influence. He is not interested in accolades or power.

As he puts it: “We cultivate vines, not egos at Taittinger”. A determined connoisseur, hedonist and humanist, Pierre Emmanuel Taittinger successfully bought back his family’s business from the Starwood Group following their buy out of the business the year before. Winning back the business was an act of duty, carried out in the spirit of family pride. He is surrounded by a young, passionate group of professionals, who work closely with one another as guardians of Taittinger and all that it represents and inspires.

Read + : A mission for pleasure

We only live once, but what a time !

This wine of celebration and love is the most wonderful prelude to any occasion. 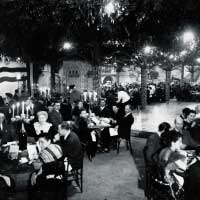 THE MAGIC OF
INSPIRATION

It was Corinne Deville, the mother of Pierre-Emmanuel, who suggested that he should call his new born daughter Vitalie. Corinne Deville, an aficionado of poetry and singular authors, loved the name which the mother and sister of poet Arthur Rimbaud had also been called. He, just like her, was from the Ardennes.

Vitalie’s education complimented these roots and allowed her to fully tap into her creative instincts. As Vitalie recalls: “We were allowed to do anything, even paint the furniture in our bedrooms. There were no limits to our creative drive”. By the time she was ten, she was transfixed by the paintings of Alfred Courmes, whose work her father collected. It became an inspiring and significant passion. Much later in her life, after she had finished studying Art at the Émile Cohl School of Design in Lyon, Vitalie Taittinger wrote a book together with Gilles Bernard about the surrealist painter and his poetic work.

For Vitalie, “art is important. It is what nourishes me”.

Vitalie Taittinger joined her father in 2007, when he repurchased the Taittinger Champagne House. She was convinced about the need to work alongside him, in order to sustain the family spirit behind the Champagne House. For two years she worked as a consultant, before being brought in permanently to oversee the marketing department. She was then given the position of Marketing Development Director, before assuming the role of Artistic Director. Today, she is the Marketing and Communications Director. She has been both an inspiration and an ambassador of the brand for 11 years, and she plays a direct role in representing the Champagne House in France and abroad.

“I was brought up with the idea that you have to find your own path in life and not follow one that has already been set out for you” She had not envisaged working in the family business at first, much like her brother. Nevertheless, she became imbued with a passion and energy for the challenge, and has even found meaning in it:
“You should not just do things for no reason. They should be part of a story and have a clear intention”.

Whether collaborating with artists for the Taittinger Collection or organising the Pierre Taittinger International Culinary Award with top chefs, it is this philosophy which she tries to incorporate into everything she does and wherever she goes. This is clear for all to see when she presents and talks about the family story or is researching blends through to matching the bottles with the perfect packaging.

The eldest of Pierre-Emmanuel Taittinger’s children, Clovis oversees the international development of Taittinger champagne. Today, around 75% of sales take place outside of France.

Clovis, as an ambassador for the brand, tirelessly seeks out new markets. Over the past 10 years, he has succeeded in introducing the brand to around fifty new countries. In addition to his business sense, Clovis Taittinger, feels the desire to share the pleasure and happiness that champagne can bring to as many people as possible, just like his father. Champagne, for Clovis, is synonymous with ‘surprise and magic’, and is the “best way to say ‘I love you’” in all languages.

He pays attention to the consistent quality and excellence of Taittinger champagnes, which he promotes around the world. His thorough knowledge about the different palates and cultures of international clients is a real bonus when preparing champagnes for international award panels. True excellence does not only remain in the confines of tradition. Clovis Taittinger, ever inquisitive, is always one of the first to question the status quo, opening the Champagne House up to the world and to its own development.

Although he is today an essential piece of the jigsaw in the family business, Clovis Taittinger become part of the Champagne House almost by accident. He graduated from Edhec Business School and graduated with a degree in History from the University of Sorbonne, Paris. After graduation, he worked for several years primarily in the banking and auditing world. However, in 2007, following the repurchase of Taittinger, and at the request of his father, he joined the young team which his father wished to have behind him to revitalise the family business.

A MISSION FOR
PLEASURE

A love of the mountains (he refers to his Chamonix home as his “oasis of peace”), Pierre-Emmanuel Taittinger is nonetheless a tireless traveller. He is curious about everything and everyone; always enthusiastic about the world around him. Naturally, it is in France where this staunchly patriotic businessman particularly loves to explore and make a difference to the lives of those around him.

This determination and family pride led him into an epic battle in 2006 against the Starwood Group, to win back the Taittinger Champagne House founded by his grandfather in 1932. It is also where he himself had worked for 30 years.

Pierre-Emmanuel Taittinger is the son of the well-respected statesman Jean Taittinger, who during his lifetime served as deputy mayor and mayor of Reims, Secretary of State for the Budget, Keeper of the Seals, and was the Minister of State under President Pompidou. Pierre-Emmanuel inherited his determination for the constant pursuit of excellence. It is this determination which has driven the reputation of Taittinger Champagne for over three generations. He inherited his sense of beauty and his ‘interest and appreciation of things’ from his mother, Corinne Deville, who was herself an artist. This side of his character allows him to take a step back and appreciate each second which ticks by, as much as each glass of champagne. “Our work is based on humility and tranquility”, he notes, adding, “The past is important, but not fundamental. One can also live in the moment - the ‘Taittinger moment’ – without digging up the past. Such moments are at the forefront of why we do this. They are deliciously special, excitingly expressive and wonderfully warming”.

Pierre Emmanuel joined the Champagne House in 1976 as a salesman. Working hard over the years, he worked his way up to become the Sales Manager, Deputy General Manager and then General Manager, where he learnt ‘to love this business above all else’. He bought back the company in 2006 with the financial backing of the Nord Est Crédit Agricole Bank. When he became President of the Taittinger Champagne House, he brought in a young team of motivated professionals, who work closely together, driven by the same creative spirit and will to succeed. They focus meticulously on the image of Taittinger, its international reach and responsible farming methods. To reach this goal, Pierre-Emmanuel Taittinger can count on his son, Clovis and his daughter, Vitalie. Both work alongside him in the day to day running of the Champagne House, alongside his team of dedicated professionals.

Born in 1953, Pierre-Emmanuel Taittinger is happily married and has three children. He graduated from the ‘Centre de Formation aux Affaires (CFA)’ in Reims and the ‘CPA’ (Centre de Perfectionnement aux Affaires) in Paris. He has been President of Taittinger since 2006, as well as being Chairman of ‘Domaine Carneros’ in California, which was created in 1988 as a result of the historic partnership between Taittinger and the Kopf family. He is also President of the ‘Association Viticole Champenoise’ (AVC) and President of ‘La Mission Coteaux, Maisons et Caves de Champagne’ – a branch-off organisation from UNESCO World Heritage. In 2015 he made English Wine history establishing Domaine Evremond in Kent with his British partners Hatch Mansfield, the first Champagne House to plant a vineyard in England. As well as the management of the Taittinger Champagne House, Pierre-Emmanuel Taittinger has always held dear the promotion of the Champagne region itself, in terms of increasing awareness about its history, heritage and people.